State Rep. Terry A. Johnson, DO (left), a family physician from McDermot, Ohio, poses with OOA Past President John F. Ramey, DO, and OU-HCOM Dean Kenneth Johnson, DO, during the 2013 Ohio Osteopathic Symposium.

The osteopathic profession in Ohio celebrated a historic occasion in 2010, when Terry A. Johnson, DO, an osteopathic family physician, became the first Ohio DO to ever serve in the Ohio General Assembly.  Rep. Johnson, a graduate of the Ohio University Heritage College of Osteopathic Medicine, used his elected position to proudly promote his osteopathic heritage. He served in the Ohio House of Representatives for eight years.

The Ohio healthcare community is involved in two major initiatives at the present time: (1) stopping the prescription drug abuse epidemic and (2) transforming the delivery of healthcare through patient centered medical homes and care coordination.

The  Ohio Patient Centered Primary Care Collaborative, coordinated by the Ohio Department of Health, is leading medical home and related payment reform efforts, while  Primary Care Progress has been engaged by the department to  encourage medical students to pursue primary care careers. Ohio ACOFP Member Richard J. Snow, DO, MPH represents the OOA and Ohio ACOFP in these initiatives.

The Governor’s Cabinet Opiate Action Team (GCOAT) -- coordinated by  by the Directors of the Ohio Department of Health, the Ohio Department of Aging, and the Ohio Department of Alcohol and Drug Addiction Services -- is spearheading efforts to stop prescription drug abuse and eliminate "pill mills" through five working groups.  They include: (1) Treatment; (2) Professional Education; (3) Public Education; (4) Enforcement; and (5) Recovery Support.  Ohio ACOFP Cynthia S. Kelley, DO, and Cleanne Cass, DO, a family physician and hospice medical director from Dayton, have been representing Ohio ACOFP and the OOA in important discussions involving prescribing guidelines and pain management.

The Ohio Office of Health Transformation has created a video page on its web site with testimonials from health care stakeholders speaking on the OHT's plans to rebalance long-term care, improve care coordination, integrate behavioral and physical health care and modernize reimbursements. Click here to hear what OOA representative Richard J. Snow, DO, MPH has to say.

The Ohio ACOFP, along with the Ohio Osteopathic Association, routinely attends meetings and reviews, analyzes and interprets agency regulations as they are promulgated. Two of the most important initiatives underway in Ohio are related to the Ohio Patient Cenetered Primary Care Collaborative and the Governor's Opiate Action Team (GOCAT) which is dedicated to controlling prescription drug abuse epidemic in Ohio.  For rules and regulations and other information about health-related state agencies, visit the following websites:

To more effectively advocate for primary care initiatives, the Ohio ACOFP is an active member of the Ohio Coalition of Primary Care Physicians. Representing more than 15,000 current and future primary care physicians who serve on the front lines of medicine providing care to the citizens of Ohio, the Coalition includes the Ohio Osteopathic Association, Ohio ACOFP, Ohio Academy of Family Physicians, American Academy of Pediatrics-Ohio Chapter, the Ohio Chapter of the American College of Physicians and the Ohio Chapter of the American Congress of OB-GYNs. 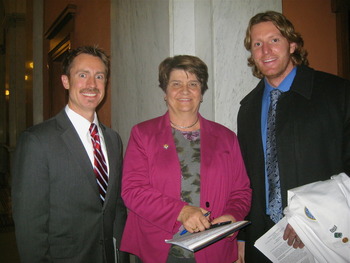 To help promote the importance of the concept, the Coalition published and distributed  a four-page color brochure outlining the concepts of a medical home. The publication notes that healthcare reform is vital to Ohio and that the patient-centered medical home model is essential to successful healthcare reform. Why Ohioans Deserve a Medical Home provides information for public officials as they work on this important issue, as it details the current healthcare system in crisis, what every Ohioan would have with a personal medical home, and the Patient-centered Primary Care Collaborative's definition of what constitutes a medical home. It also includes patients' stories. Click here to learn Why Ohioans Deserve A Medical Home.